Paklenica National Park on the Croatian coast near Zadar on a detailed, contoured and GPS compatible map at 1:25,000 from Astroida, highlighting waymarked hiking paths and cycling routes both within the park and outside its boundary, plus on the reverse notes about the park.The map covers both the Velika and the Mala Paklenica Canyons and the surrounding area, presenting the topography by contours at 10m intervals plus relief shading, colouring and/or graphics indicating woodlands, meadows, etc. 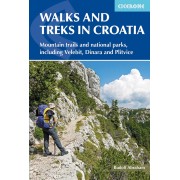