NATIONAL GEOGRAPHIC ADVENTURE MAP SOUTH AFRICA National Geographic's South Africa AdventureMap is designed to meet the unique needs of adventure travelers detailed, durable, and accurate. South Africa includes the locations of thousands of major cities and towns with an index for easily locating them, plus a clearly marked road network complete with distances and designations for major highways, limited access highways, and more. Both paved and unpaved roads, tracks, and trails are marked for those adventurers who wish to explore less traveled routes.

The west side of the South Africa map includes the Northern Cape, Western Cape, Eastern Cape, and portions of the North West and Free State provinces. Diverse points of interest are featured including the Western Cape's wine regions and spas. Along the coast between Cape Town, the legislative capital, and Port Elizabeth, areas for whale watching and shark-cage diving are noted. Johannesburg and neighboring city Pretoria (administrative capital) are included on the east side of the map along with Bloemfontein (judicial capital) and the coastal city of Durban. South Africa's many national parks, reserves, and wildlife sanctuaries are clearly marked, as are other natural points of interest and scenic viewpoints. Dozens of beaches are noted from the Sunshine Coast to the North Coast for travelers wishing to soak up some sun.

Our South Africa AdventureMap is printed in the U.S.A. on a durable synthetic paper, making it waterproof, tear-resistant, and trail tough capable of going anywhere you do. The map is two-sided, and can be folded to a packable size of (4.25" x 9.25"), unfolded size is (26" x 38"). 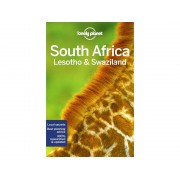