- 24 Routes and the Jersey Coastal Walk

Guidebook describing 24 day walks on Jersey in the Channel Isles. Parts of many routes can be combined to make longer routes, including the 48 mile Jersey Coastal Walk and part of the Channel Islands Way. Walks are between 3 and

Seasons
all year round, but particularly good in spring when the wild flowers are at their most colourful; busy during the summer, with long, sunny days; quieter in autumn; sometimes bleak in the winter

Difficulty
good paths and tracks are used, along with quiet country roads, avoiding main roads wherever possible; gradients are often gentle, but there are some rugged cliff paths and occasional steep slopes; short walks can be combined to make longer ones 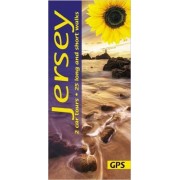