Lost to the jungle for centuries, Machu Picchu was rediscovered by Hiram Bingham 100 years ago.  It's now probably the most famous sight in South America – and justifiably so.  Perched high above the river on a knife-edge ridge, the ruins are truly spectacular.  The best way to reach them is on foot, following parts of the original paved Inca Trail over passes of 4200m (13,500ft) .

It is the only guide to have:

Coupled with in-depth chapters on Lima and Cusco it really is a one-stop solution for people interested in visiting the area and the breadth of additional history, archaeology and cultural information will ensure that you have the best, broadest experience when actually there. 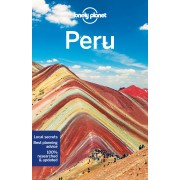