- From Budapest to the Black Sea

Cycling guidebook to the Danube Cycleway exploring the route from Budapest to the Black Sea, the more adventurous second part of the Danube, suitable for most abilities and bike types. The river route starts in Hungary and continues into Serbia and Bulgaria before ending at Constanta in Romania. The Danube Cycleway is also part of EuroVelo 6 (EV6).

Seasons
can be cycled at any time between April and October, but best in April-June and then September-October: July and August can be very hot

Difficulty
although the route is mostly level, with a few gentle gradients, it is a challenging ride due to the lack of tourist infrastructure, particularly in Romania. There are long distances between places offering accommodation and refreshments, almost no tourist offices or cycle repair shops, and very few rural Romanians speak west European languages. There are long stretches in Hungary and Serbia along unsurfaced flood dykes, although alternative routes are given to allow you to avoid these stages. Otherwise surfaces are mostly asphalt and in good condition, suitable for hybrid or touring cycles 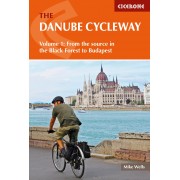