- From the source in the Black Forest to Budapest

The first in a two-volume set, this guidebook describes cycling the first 1269km of the Danube river from its source in the Black Forest to Budapest, passing through Germany, Austria, Slovakia and Hungary. Suitable for all levels of cyclist, the route visits the great cities of Vienna and Bratislava before arriving in the Hungarian capital.

Seasons
Apart from the upper part of Stage 1 in the Black Forest, where snow may lie until April, the route can be cycled at any time of year, but is best between April and October.

Centres
A point-to-point route with no particular bases.

Difficulty
​A straightforward cycle ride, mostly off-road on well-surfaced (mainly asphalt) cycle tracks with virtually no gradients, except for a steady 500m ascent to reach the start. Suitable for all levels of cyclist, on all types of cycle, though racing cyclists may wish to use alternative routes to avoid a few short sections of gravel surface. 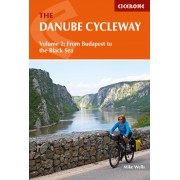