A guidebook to walking the Thames Path, a National Trail covering 180 miles between London's Thames Barrier and the river's source in Gloucestershire, passing through Windsor, Oxford and rural countryside. Provides full information for this easy riverside route that takes around two weeks to complete. Includes a 1:25K OS map booklet.

Seasons
The River Thames is a constantly changing green corridor. While care must be taken during occasional winter flooding this is an all season walk always offering new rewards and views.

Difficulty
The route is described in 20 sections between 4 and 16 miles in length. This is a mainly flat walk with only one steep hill. East of Oxford, and especially in London, the paths are good and usually near public transport. The more challenging sections needing a little planning are upstream of Oxford.

Must See
​takes the walker from the Thames Barrier in London to the source of the river in rural Gloucestershire; passes historic sites such as Greenwich, Kew Gardens, Hampton Court, Runnymede, Windsor Castle and Oxford. 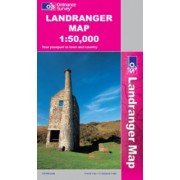